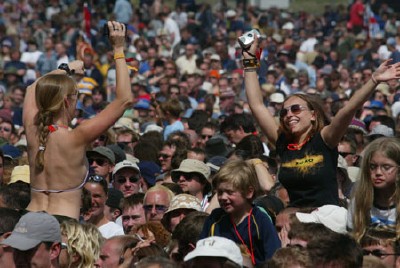 As a society we’ve become obsessed with fame. People no longer want to be known for doing something useful – they just want to be known for doing anything. Witness the moronic parade of wanna-be anythings on every pointless talent show sticking fireworks up their arses and congratulating themselves when they end up in A&E with second degree burns…

Therefore I propose a new form of fame – frame. To be framous as opposed to being famous you only have to have appeared in a single frame of video.

If your smiling mug has appeared on the television box for 1/25th of a second (or 1/30th of a second in the US) send me a still and I’lll publish it here.

A word of warning:

Note that high definition sports feeds are sometime shot at 50 or 60 frames a second and therefore you could theoretically be caught on camera for 1/50th or 1/60th of a second. This to my way of thinking is simply not long enough. After all, to be framous we have to draw the line somewhere.