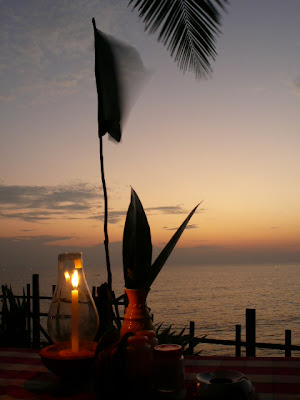 We’ve hit Varkala, a clifftop resort on the west coast of India and as far south as we intend to travel. It’s hot here, damn hot and no sea breeze despite being half way up a cliff. That’ll be global warming for you I suppose.

The place appears to be full of tourists on package holidays so it’s a bit of culture shock and I suspect we’re suffering a bit of backpackers snobbery.

Ooh check you, been away for three weeks and you’re declaring yourself a backpacker.

Anyway, at least we haven’t “gone native” yet.

For those of you not in the “know” “going native” is a Lawrence of Arabia quotation and involves the following:

This is despite the fact that local clothes are not necessarily better. For example wearing a dhoti. A dhoti is a wrap around skirt for men, basically a big piece of cloth tied around the waist. The problem with a dhoti that anyone who has wandered around the house with a towel wrapped around their waist knows is the bloody thing keeps falling down. Indian streets and full of people constantly pulling up their dhoti’s up as they slide inevitably towards the ground as gravity compels them to do.

I mean for heavens sake, belts and elastic do serve a useful purpose. It’s not just unnecessary elaboration you know.

The logic being presumably “well it doesn’t do the locals any harm” Presumably by the same logic you won’t get sun burnt either.

Stating the obvious not withstanding, you’re from a different continent for gawds sake, is there not a slim chance your body may react slightly differently?

Anyway, that’s quite enough ranting for one blog. Move on.. Move on..

Oh and dreadlocks. Don’t get me started on dreadlocks. I think that’s also known as “being too lazy to wash you hair for six months”

Right, back to the story, I mean adventures. Our bus driver today appeared to be a declining male alcoholic in his late fifties. He showed all the usual signs: a weeks worth of beard growth, lazy eyes, drifting concentration, unwashed clothes, shirt open to the navel, you know the sort of thing. Think Oliver Reed late 80’s on Parkinson.

I had visions of him drifting into a quiet alcoholic slumber of an evening in a lonely bedsit before returning to work in a dazed stupor to spend a day scarring the shit out of his passengers.

The journey was, shall we say exciting. I was also privileged enough to have a ringside seat to events being sat right at the front of the bus. Perhaps I should have paid more attention when getting on the bus. At the time it just seemed unusually that everyone was trying to get on the back of the bus – the front door being mysteriously clear…

So, perhaps a few gems of his driving. How does overtaking on a crowded two lane bridge grab you? I mean where exactly did he think the other vehicles were going to go? Perhaps he thought they would sprout wings and simply fly out of the way.

Then there was the comedy attempt to triple overtake* on a blind left hand bend.

There were many more. At one point I did consider getting the video camera out of my bag to capture a few minutes of the carnage for posterity, taking my eyes off the road seemed like a bad idea however.

I’m coming to the conclusion that travelling in a country where 60% of the population believes in reincarnation may not be the best idea.

Pat has pointed out that this may not paint a particularly glorious picture of India or my experiences of it. To be honest I’m only having a bit of fun at India’s expense. All is good you can rest assured.

As Douglas Adams said “Don’t Panic!” On our crazy bus journey I didn’t really think we were actually in any particular great danger, lets face it I can’t imagine a bloody great bus suffering a great deal of damage if it hit a three wheel autorickshaw. Best to think of it as a roller coaster ride.

*I’ve made that term up, it’s when there are three vehicles side by side all overtaking a fourth vehicle, each trying to get past the others to the left as well. The one on the far right (our bus in this example) is trying to pass all three in one hit. Tricky manoeuvre on a two lane road.