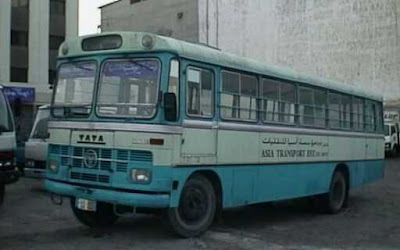 When I talk about buses I mean proper buses, not those pseudo train replacement services – coaches, which profess to do all those things trains do and singularly fail to achieve any of them.

Think about it. A coach is supposed to speed you directly to you destination without all the constraints of railway tracks.

The reality is they follow exactly the same routes, because the people who went to all the time and effort of building a railway line actually put in a little thought about the route. They worked out all the places you would ever want to go long before the coach companies turned up on the scene.

What do you find outside every train station? A coach station. I rest my case.

Then there’s the speed thing. Has anyone ever been on a coach that arrived at the stipulated time? There’s always traffic, or a flat tyre or some other minor calamity.

And what about the abomination to end all abominations – the sleeper coach. What lunatic thought that was a good idea?

You cannot transplant the concept of a sleeper train, something that runs on perfectly level tracks and gentle gradients I might add into a four wheeled vehicle travelling on pothole strewn roads up hills and round bends originally carved out by Peter the goat herder ten centuries ago.

The greatest irony of the sleeper coach? They actually turn all the lights out so you can’t even read a book. You’re reduced to sitting in the dark being hurled around like a demented passenger on the worlds longest ghost train.

The only person capable of sleep on board is the driver, who is getting close to the end of a double shift and has matchsticks holding his bloodshot eyes open.

No, a bus is a proper form of transport. It tootles around stopping at convenient places so you can get to the corner shop and pick up your groceries – you know the sort of thing.

This being India, a very populous place, the buses are big. I mean really big. If there is a dinosaur of the bus world then the Indian bus is it. They look like they were built in down time at the shipbuilding yard. The sort of thing of thing they practice on before starting on the Titanic II. You get the idea.

A big shuddering, grumbling monster of a vehicle, spewing thick black fumes out the back, probably due to it not having had an oil change since it left the factory.

Indian coaches are big. Indian roads however are not.

You think this would perturb the drivers somewhat, but it doesn’t seem to phase them. I think I’ve worked out their strategy.

This as you can imagine has some repercussions for the other traffic. A forty foot long 10 ton coach weaving its way though the Indian traffic is rather like an icebreaker ship ploughing its way to the south pole.

We were sat at the front of the bus on our latest journey, but when I happened to glance out the back it wasn’t a pretty sight.

Dazed looking cyclists, auto-rickshaws forced into the gravel. Confused looking chickens having discovered flight despite having had their wings clipped, fruit from roadside stores all blowing around all in our wake of dust and fumes. It looked like the tornado scene in the “Wizard of Oz.” 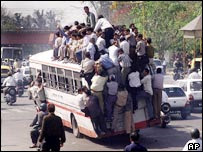