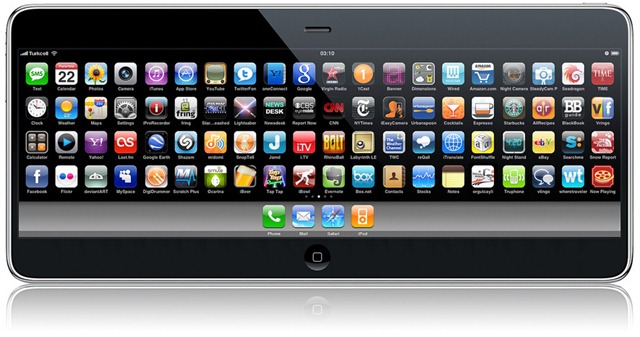 UPDATE – I’ve got hold of an iPhone 4 for testing and have checked out the rolling shutter artefacts. Read the post here.

Yes folks it really does look like the one in the picture above… Well, no obviously not really… that would be frankly stupid, however I’m sure the Apple fan boyz would buy it if it existed and have a tailor knock up some trousers with extra big pockets to fit it in.

So what is new in the iPhone 4G Spec? Well, to us folks obsessed with anything video related it’s the HD video capability – well, faux HD – it’s 720p30 that non-existent HD format that seems to be so popular these days.

Still, the idea of being able to carry around your phone and shoot off some half decent quality moving pictures is fairly appealing. Let’s hope that Apple have managed to remove some of the terrible “jello” artefacts that plague the 3GS video capabilities.

Of course, I wouldn’t throw your HD camcorders away just yet. My general experience of hand held “pocket” HD cameras is that they are fairly dire. Generally there is no form of image stabilisation so the video is usually nauseatingly wobbly and inevitably the data rate is usually something about the 7 – 10Mbs range which means it’s fairly seriously compressed. As way of an example Broadcast quality cameras vary at the very lowest end of 35Mbs up to 220Mbs and beyond. And for those of your who are interested RAW uncompressed HD video is about 1.5Gbps. You can do the maths and work out the compression ratios yourself.

Add in to this mix a lens about the size of a pea which allows in about as much light as a pinhole camera low light “performance” tends to be what I would call “interesting.”

Having said all this I will be interested to see what all those clever people who make up the apps store will do with it and that in itself makes it quite an exciting proposition.

Anyway for all of those people who just love to drool over specifications (you know who you are) here’s a hastily cut and pasted break down: