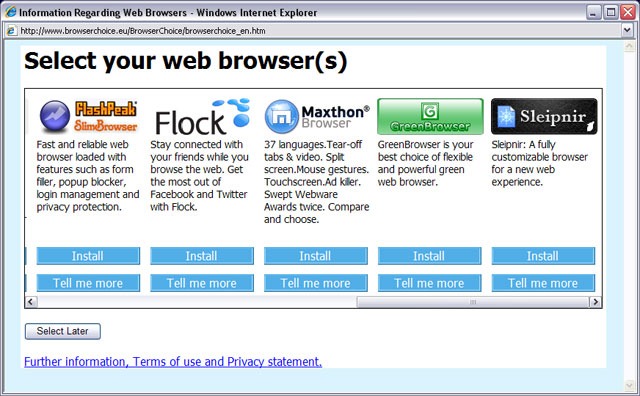 Those of you not following the IT press may have missed that Microsoft and the EU have been scrapping for months about the supposed monopolistic practice of bundling Internet Explorer free with every copy of Windows.

The argument “If you give it away for free you have a monopoly” doesn’t really make any sense to me – especially when you look at it in the light of the open source market – Presumably by this logic if Ubuntu becomes incredibly popular it will also incur the wrath of the EU for stopping healthy competition.

What of course is the root of this is the quality of the product. If IE is a good browser, people find no need to use anything else, it is after all just something for looking at the Internet. When it became somewhat stagnated a few years ago it didn’t take long before young upstart Firefox came along and nicked a sizable proportion of it user base.

The net result of this is the “browser ballot” – from now on when you update any version of Windows you get the above screen showing you nine different options of browsers to install. I’ve deliberately shown the more esoteric ones in the above screen grab – my favourite being “GreenBrowser” complete with it’s largely illiterate description. As you can image your average Joe Public is going to be utterly baffled by this – I’m already fending off the confused support calls.

So is any of this about healthy competition and monopolistic practice? Is it bollocks. The complaint the EU received that instigated all this nonsense originally came from Opera – a rival browser manufacturer that was miffed at it business model being confused by no longer being able to sell its browser.  Opera wanted any excuse to justify why they should still be able to sell its product even though there was by this point half a dozen free alternatives. Hence, it complained to the EU of monopolistic behaviour on the part of Microsoft and the EU had little choice but to pursue the matter.

Of course all this does raise a rather interesting point about what should be allowed to be shipped as programs with in an OS. Presumably now the flood gates have opened we can start petitioning for a “Word Pad” ballot or a “Minesweeper” ballot.

Let’s be practical here for a minute, Internet browsing is now a core feature of an OS – you expect any OS to come with some sort of software to allow you to surf the Internet out of the box, without some hopelessly confusing “pick a random thing from the above things you’ve never have heard of” nonsense that is the ballot. Yeah, let people choose something else in the future if they feel inclined, but it should really just work initially otherwise how are we going to ever get our Mums on the Internet?

[blockquote]I’m currently developing my rival to Minesweeper (called Floor Sweeper) and will be complaining to the EU shortly.[/blockquote]

Apple seem to have escaped this nonsense – although being equally “monopolistic” of shipping Safari with OSX – I suspect this is down to market share. Interestingly though, Opera is just about to release a version of its browser though the App Store for the iPhone. This is going to be an interesting one because currently the App Store T&Cs prohibits (yes, really) apps that have duplicate functionality to those of built in applications.

let’s hope they won’t allow it, I want to see that bun fight.