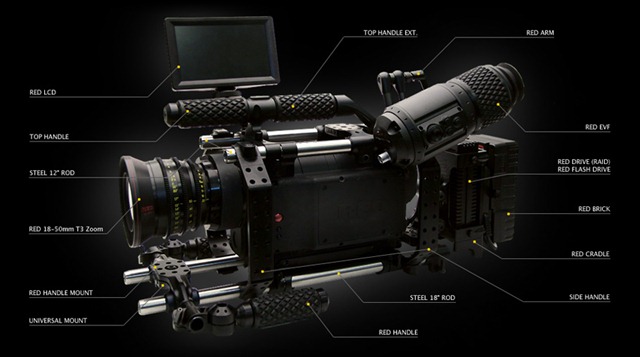 Anyone who works in the film & TV industry can’t have helped but notice the crazed jabbering that has been going on about the RED camera over the last year or two. This epoch breaking bit of technology is impressive for several reasons: A) That it is truly innovative in it approach to capturing moving images. B) The beautiful filmic quality of the images it produces. C) The fact that it seems to be a hobbyist project for the Oakley sunglasses millionaire Jim Jannard. D) The insane amount of rendering it requires to make the footage usable in traditional workflows.

RED announced something recently that could be the paradigm shift required to push the camera into the real world of episodic TV production. Namely, support for a proper clean feed HDSDI output.

This is a deal-maker for several reasons, episodic TV for cost and complexity  reasons is traditionally dependant on an offline/online workflow – something that is generally impractical with a file based workflow that does not create on the fly offline proxies – RED being a prime example of this. Dealing with file based media in an offline/online environment is ridiculously render intensive as two separate render passes of the source media have to be performed, once for the initial offline media and then again for the final online conform. Additionally, there is the overhead of having to store the original source media for the duration of of the project.

The introduction of an HDSDI output allows recording to Sony’s XDCAM format – a file based format that allows for simultaneous offline proxy creation during recording. This removes all the complication of having to deal with RED’s ever-so-clever but ever-so-labour intensive native R3D format.

The implications for this are great. TV producers can now take advantage of the glorious images produced by the RED by recording the pictures onto traditional media thus allowing well known post practices to be used.

With the imminent arrival of the Scarlet – RED’s budget camera offering in the next few months, things are looking distinctly rosy.

No more rendering…? Well, that may be optimistic…..

RED build 30 is apparently the version we should be paying attention to – this features the clean HDSDI output.