The bald fella is obsessed with this evil smelling, spikey monster fruit. I can’t see the attraction myself, although I have got used to the smell wafting from his rucksack. If you can be bothered read about it here. 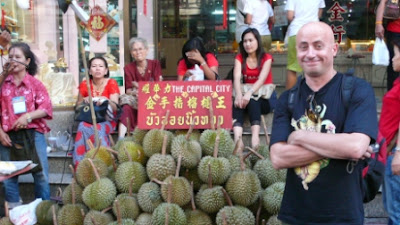 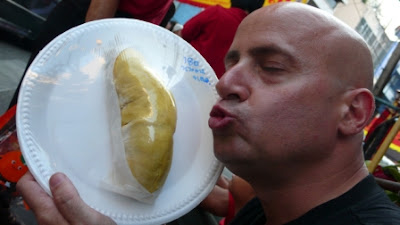 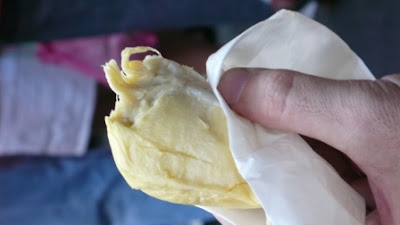 Here’s a quick cut and paste job to give you an idea:

Writing in 1856, the British naturalist Alfred Russel Wallace provides a much-quoted description of the flavour of the durian:

“A rich custard highly flavoured with almonds gives the best general idea of it, but there are occasional wafts of flavour that call to mind cream-cheese, onion-sauce, sherry-wine, and other incongruous dishes. Then there is a rich glutinous smoothness in the pulp which nothing else possesses, but which adds to its delicacy.”

Wallace cautions that “the smell of the ripe fruit is certainly at first disagreeable”; more recent descriptions by westerners can be more graphic.

The English novelist Anthony Burgess famously said that dining on durian is like eating vanilla custard in a latrine.

“… its odor is best described as pig-shit, turpentine and onions, garnished with a gym sock. It can be smelled from yards away. Despite its great local popularity, the raw fruit is forbidden from some establishments such as hotels, subways and airports, including public transportation in Southeast Asia.”