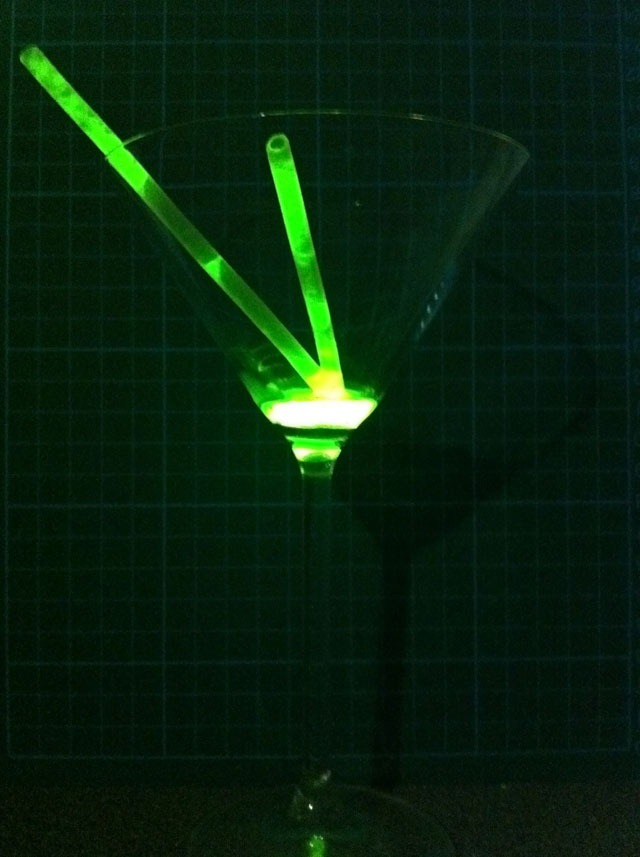 I’m working on a project involving glow sticks, but more on that later. In the meantime anyone fancy a cocktail?

For those of you who are wondering how a glow stick works here’s a quick description. The most interesting part being if you heat your glow stick up it glow brighter.

What is a Lightstick and How Does it Operate?
A lightstick is a plastic tube with a glass vial inside of it. In order to activate a lightstick, you bend the plastic stick, which breaks the glass vial. This allows the chemicals that were inside the glass to mix with the chemicals in the plastic tube. Once these substances contact each other, a reaction starts taking place. The reaction releases light, causing the stick to glow!

Although the light-producing reaction is not caused by heat and may not produce heat, the rate at which it occurs is affected by temperature. If you place a lightstick in a cold environment (like a freezer), then the chemical reaction will slow down. Less light will be released while the lightstick is cold, but the stick will last much longer. On the other hand, if you immerse a lightstick in hot water, the chemical reaction will speed up. The stick will glow much more brightly, but will wear out faster too.

What’s Involved?
There are three components of a lightstick. There need to be two chemicals that interact to release energy and also a fluorescent dye to accept this energy and convert it into light. Although there is more than one recipe for a lightstick, a common commercial lightstick uses a solution of hydrogen peroxide that is kept separate from a solution of a phenyl oxalate ester together with a fluorescent dye. The color of the fluorescent dye is what determines the resulting color of the lightstick when the chemical solutions are mixed. The basic premise of the reaction is that the reaction between the two chemicals releases enough energy to excite the electrons in the fluorescent dye. This causes the electrons to jump to a higher energy level and then fall back down and release light.

Specifically, the chemical reaction works like this: The hydrogen peroxide oxidizes the phenyl oxalate ester, to form phenol and an unstable peroxyacid ester. The unstable peroxyacid ester decomposes, resulting in phenol and a cyclic peroxy compound. The cyclic peroxy compound decomposes to carbon dioxide. This decomposition reaction releases the energy that excites the dye.